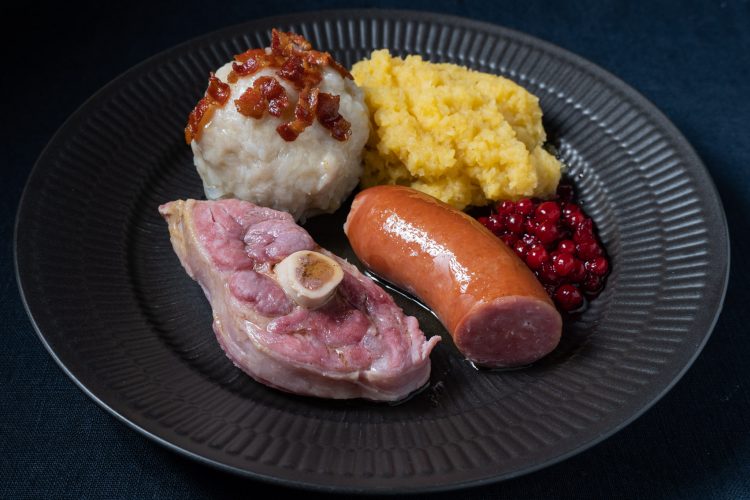 Komle is one of the most iconic Norwegian dishes, and has many regional varieties and names. But in its essence, it’s still the same; a dumpling. And as we all know, a dumpling is the food of the Gods. Here’s how we make it!

I have dug a bit into the history of this dish, and I find that knowing the roots of a dish helps me understand it better. Here’s the short version of what I found. But do feel free to scroll past, and just cook the damned thing if you prefer 🙂

From the book “Fattigmenn, tilslørte bondepiker og rike riddere” by sociologist dr. polit Annechen Bahr Bugge we know that Norway has long traditions for dumplings, but it wasn’t until around 1750 that Norway got its first potatoes, and it took a few more decades before skeptical farmers were convinced to actually spend time farming them.

Until they were hungry enough actually.

A combination of failing crops and a British trade blockade caused horrible famines during the Napoleon wars in 1808–1809 and 1812–1813, and they were forced to eat anything they could get their hands on, including potatoes and bread made from bark.

Before that, all dumplings were made from flour, specifically barley and oat, cause those were the only cereals that would grow well up here.

They were also mainly simmered in milk or soured milk, but sometimes also in a stock, typically based on a cured pork belly similar to modern bacon. If you were rich enough.

But most Norwegians were piss poor, and flour dumplings simmered in milk was a staple in our mainly lacto-vegetarian diet up until around 1900.

From the book “Et” by “Ryfylke bygdekvinnelag“, we hear about an old geezer in Sandnes (just south of my home town Stavanger) who told us about the tradition of “Komlesuppe“, where you use the cooking liquid for the Komle as soup, with the dumpling in it. We also hear about how if was common to simmer Komle in milk.

Connect the dots, and you can see how Komle has, not unlikely, evolved from a barley or oats dumpling simmered in milk, to a famine driven inclusion of potatoes, to the dish we serve today.

Like I mentioned, there are a huge number of regional varieties and names. They’re some times big, some times small, some times with a piece of salted pork fat or meat in its center, and some times even made from fish, or blood.

They are some times called Ball, other times Raspeball, Komle, Kompe, Klubb, Kløbb, Klot (say that 10 times fast!) and if they’re simmered in milk, they’re called Klimper and served as lunch…

Some serve them just by itself with some melted butter, as a vegetarian dish, others with a bit of meat, with mashed rutabaga, others with just slices of boiled rutabaga, and some have boiled carrots.

Some have beer and aquavit with their Komle, while others drink a glass of soured milk.

Some top their Komle with melted butter or bacon, while others use sugar or dark syrup – and brunost or geitost is totally not unheard of either…

This recipe is from Ryfylke county on the south-west coast of Norway, and is how my family have always served them.

We call them Komle, we make them with potatoes, barley flour, a bit of wheat flour and salt, they are shaped the size of a tennis ball, and we serve them with mashed rutabaga, lingonberries, bacon butter for the Komle, and a bit of salted lamb and a smoky sausage.

We drink caramelly strong ale and aquavit, or a glass of home made juice from berries. If you like beer, look for a low hop, caramelly (not dark fruity) Barleywine. Or better yet, Vossaøl, which is a Norwegian farmhouse ale style. Though I prefer my own homebrewed Vossaøl, Voss bryggeri has a decent example (info on RateBeer).

Komle is extremely filling. Check your moorings, make sure your anchor is well set, cause you’re not going anywhere after this!

Between the two of us, Lea and I ate 5 dumplings; Lea had two, I had three, but I think two-and-a-half would’ve been more than enough for me.

The below recipe is for 4 servings

Start by making the salted lamb (or mutton). Simply sprinkle the fine sea salt on both sides of the meat, and let it sit uncovered in the fridge for at least 24 hours. It keeps very well for days because of the salt.

Thaw the lingonberries, and simply mix in with the sugar. If you can’t get fresh or frozen lingonberries, see if you can find lingonberry jam. Failing that, cranberry jam would be a decent substitute.

You wan to use starchy potatoes for this. Beate or Asterix in Norway, Russets or Yukon Golds in North America. On the day of serving, boil the 300 g potatoes, mash them while warm, and grate the 1 kg raw potatoes. We find our coarse Microplane grater is the perfect tool for this, and we find it easiest to grate into a oven pan.

Bring a large pot, minimum 5 liters, filled with water to a boil. The one we use is 7.5 liters. Do not salt the water, there’s salt in the dough.

Sprinkle over the grated potatoes the flour and salt, then mix with your hands until you have a cohesive dough, firm, but not stiff. The barley or oat flour will make the dough sticky, but it it’s too soft, add more flour. Do not let sit for too long, or it’ll become very sticky and hard to work with.

Simmer the Komle ever so gently for 60-80 minutes.

Peal and cube the rutabaga, and boil in water for 60 minutes, or until tender. Do not salt the water, you’ll add salt later.

Drain the rutabaga into a colander, and let steam off – this will get rid of a lot of moisture. Mash well, add butter, season to taste with grated nutmeg and fine sea salt. First taste your way to the right amount of salt, then find the right nutmeg; the salt will cancel the bitterness of the root, and bring out the sweetness.

If the mash is too wet, add a little bit wheat flour, but make sure to gently simmer for 5 minutes to cook our the raw flour flavor. Use as little flour as possible, as adding flour will mute the flavors.

Gently simmer the salted lamb for 60 minutes. Do not salt the water, the meat is already salted.

A few minutes before serving, cut the sausage in four, and plop into the pot with the lamb to heat it through. Cut the bacon into thin strips, and fry in a small amount of oil until light golden brown. Add the butter and continue frying on medium heat until the butter is golden brown, and you basically have bacon infused beurre noisette.

That’s it! Plate, serve, and enjoy your evening!

Pro tip: consider making a double batch dumplings – they are magnificent the day after, sliced and pan fried. Serve it like you would hashbrowns, or my contemporary version of komlesuppe: in cold soured milk, with toasted hazelnuts and dill oil.