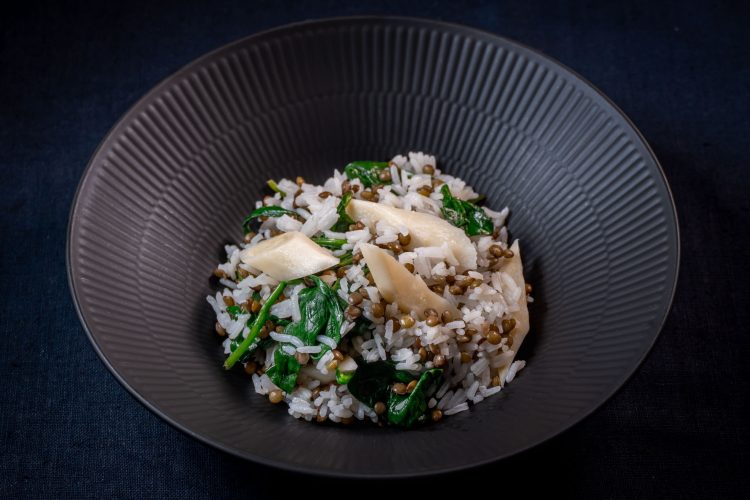 In the series of super simple, dirt cheap plant based dinners, this is quickly becoming one of our go-to dishes. It’s a fantastic everyday dish that requires minimal time in the kitchen, yet deliver maximum flavor and satisfaction. It’s even vegan :o!

Let me start out by saying you have a lot of freedom with this dish. Nothing is time sensitive, so you can make almost everything ahead, and just warm things up quickly when you’re ready. And when you’re ready, fill your bowl, grab a spoon and just munch away!

You also have a lot of flexibility when it comes to the ingredients without compromizing the flavor profile. The biggest change is actually when you go from vegetarian to vegan with this dish; the knob of butter gives a rather French feel, while the olive oil will move us straight to the northern parts of Italy.

Use whatever you have, and pick the best vegetables from the store.

Find a pot of about 3 liters and toss everything for the lentils in the pot, add 1 liter of water, bring to a boil, set your timer to 17 minutes and let it simmer until then. Check for doneness. They are supposed to be aldente, but not hard.

Drain the lentils in a colander, and rince with cold water.

Boil the rice in the same pot according to package. Add your root veg on top of the rice and steam them along with the rice.

When the rice is done, let sit under lid for 5 minutes, drizzle in the oil, stir, then fold in the fresh spinach, handful by handful and let it wilt in the hot rice. Fold in the lentils next, then season with fine sea salt and the vinegar.

Mix everything well, serve in a bowl and dig in with a spoon. Feel free to finish it all off with a sprinkle of fresh chopped parsley if you have it 🙂

You may cook both the rice and lentils in advance. But keep in mind that rice must always be cooled down quickly and put in the fridge to avoid it being infected with Bacillus cereus, a bacteria that can cause food poisoning.

For this dish, stir in a bit of oil while the rice is still warm to avoid it cooling into a solid brick, then put your rice pot in the sink with ice cold water to cool down to below 15C. Then put the pot in the fridge until ready to use.