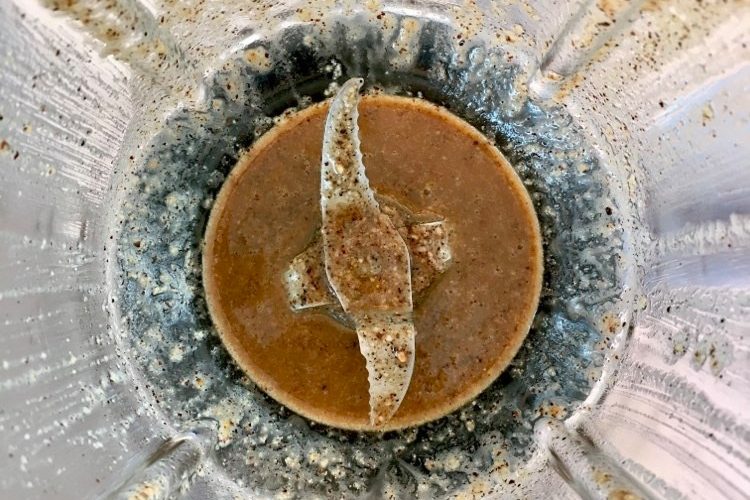 This dip was developed as part of our Viking Falafels, but turned out so magnificent, we’ve started using it on our pizza and everywhere else! And yes – it’s basically our New Nordic take on Mutabal, so if you like that shit, you’re in for a real treat!

We more or less nailed every single component for the Viking Falafels at first try, but this one was hard to get right.

The flavors were awesome in our first trial, but it was way too labor intensive. Second batch was way quicker, but the flavor was anemic. Third and fourth batch was rather meh….and then, at last – fifth batch was both easy enough to make, and had incredible, deep flavors.

It is best to let this dip sit in the fridge overnight to let the flavors really blend.

Start by preheating your oven to 200C. Grab a large handful hazelnuts (aprox 45 g) and toss in a ovenproof container. Let the nuts roast as the oven heats up.

Remove the nuts just as the skin starts to crack – or give them a few more minutes to get some more pronounced toasted flavors – but be careful so they don’t burn. Set aside to cool.

Grab your leek and cutt off the dark green part of the leek, towards where it starts to get light green. After that cut off another 5 mm until you see no more dirt and sand in between the leafs. Cut off its root too.

Cover the leek with a bit of oil, wrap in aluminium foil and bake at 200C for 30 minutes, or until completely tender. At the same time, rinse off three of the dark green leafs and put them uncovered in the oven to bake along with the rest of the leek, until completely burnt.

If you wanna have some fun, bring out your torch and scorch that fucker – or toss it on a white hot grill, straight on top of the coals.

Remove the tender leek from the oven, open up the package, and let it steam off to cool.

Meanwhile, when the nuts have cooled of just a little bit, put them in an upright blender, skin and all, and blend until a fine flour forms. This is basically a “Nordic Tahini”.

When the leek is cool enough to handle, cut through the first few layers of leek. The first 2-3 layers of leek will be woody, so toss these into the upright blender with the nuts, add the sour cream, salt, and vinegar, and run until a thick, yet structured paste forms. You want to let the woody parts of the leek create this texture.

Using a sharp knife, chop the tender parts of the leek. Mix the blended paste and chopped leek in a bowl along with 1 tbsp linseed oil.

Now is time to impart those lovely burnt notes, so take your blackened leek leafs and crush them with your hands into a separate bowl. You want to crush it relatively fine, but don’t obsess over it.

Add first half of the burnt leek to the bowl with the rest, mix, then taste. You want a pronounced burnt flavor, so add gradually more to hit the sweet spot.

Season with more sea salt and vinegar if needed.