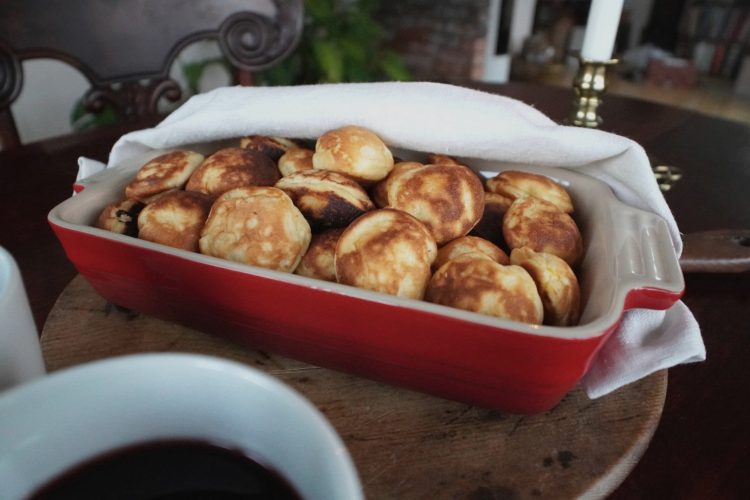 These light and fluffy spherical baked snacks are a decidedly Danish, typically enjoyed around Christmas. We love to snack on these along with a mug of Gløgg, a good book, and a fire going in the wood stove.

They are cooked on the stove top by baking in a special pan with several hemispherical indentations. If you don’t have a Æbleskivejern, you can make small pan cakes in a skillet instead. It won’t be quite the same, but totally delicious either way!

The original Danish recipe calls for buttermilk (kærnemelk), the thin, super low fat milk left from churning and making butter. It also calls for double cream to bring the fat up.

So if you can’t get actual buttermilk, you can use 350 g/0.35 liters full fat Kulturmelk/Tykmælk/Soured milk instead of the buttermilk and cream.

Whip together egg yolks, sugar, salt, buttermilk, cream and zest. Mix in the flour and baking powder until this batter is completely smooth. It’s supposed to be quite thick and rich, but not stiff. Let it sit for a few minutes to further thicken.

This is the simplest version. You can make æbleskiver with filling as well (more to come).

All the nitty gritty details – with pics & troubleshooting:

First, melt a knob of butter in a pot, and and have the brush ready for application.

Preferably, put a baking tray or serving plate in the oven and preheat at 40-50C to keep the æbleskiver warm while baking all the batches.

Brush the pan with melted butter, all holes in the pan as well as the top (In case, like me, you’re a slightly messy/clumsy chef)

It’s better to build the heat slow and steady than having it overheat and then have to try to reduce the heat. Make (at least) 1 test æbleskive in the middle hole of the pan.

When you think, you’ve got it right, double check by cutting the test-æbleskive in half. The core should have a fluffy texture, without any doughiness.

Now, get ready to make your batches! Tempo will increase drastically here. For each batch / round remember to brush each hole and top with butter.

For each of the following steps, start with the middle hole (which will be the hottest part of the pan) and move in a circle. Stick to that circle. Look out for heat imbalance in the pan.

Spoon a dollop of batter quickly into each hole, filling each hole little over half way up. (You want to leave room for the dough to rise without overflowing; typically 1.5 tbsp.

As soon as you’ve filled each hole, take a wooden knitting needle and run around the edge. If you can catch hold of the crust and move the entire half sphere in the hole, all the better.

By now the crust will have thickened, and the core still has a few bubbles but is starting to coagulate; no longer truly runny. The thicker the dough, the easier to achieve this on time.

Immediately take your two knitting needles and turn your half sphere upside down in the hole. You need to move decisively and quickly here! If not, the dough inside will run to one side, and your æbleskive will end up looking more like a UFO.

Your aim is poofy like pufferfish. So spear and turn with one needle, and adjust with the other. Stick the sides of the turned half sphere into the hole, if it tries to escape.

Now turn your round balls until they’re golden all over.

Finally pop them onto the (preheated) tray with a cloth wrapped over to keep them warm.

Repeat until the entire batter is baked. If (Gods forbid!) all the æbleskiver doesn’t get immediately devoured, you can reheat them in the oven.

Apparently you can freeze and reheat them as well, but that has never happened in our household. But you can’t let the dough sit – it won’t rise in the pan then.