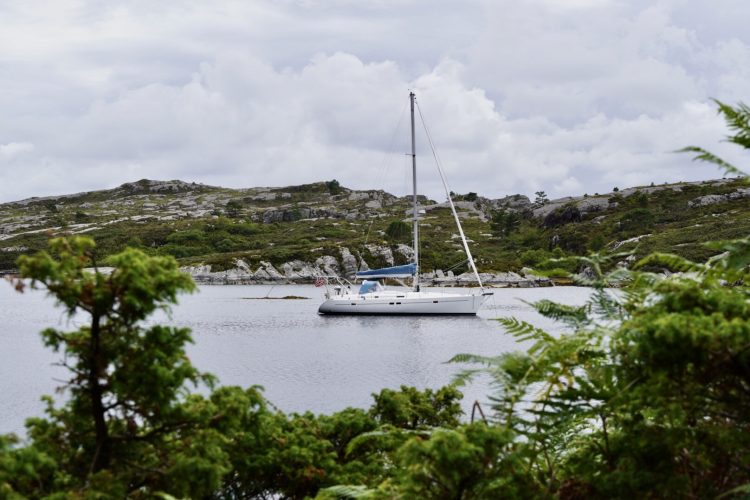 What should have been a 14 month cruise from Norway to the Caribbean and back again turned out quite differently thanks to Covid. We decided to play the cards we were dealt, and flip a finger to 2020. This is how well that went.

Instead of giving you a long winded and dramatic account for how we were hit by Covid, let me summarize things with this:

For well over a year, Lea and I had planned this journey. We had started selling off most of our way too many things and possessions, and ready to sell our beautiful, yet way too big villa which we had spent the past 10 years renovating. We simply had way too much of everything, and we could no longer justify the two of us occupying that many resources.

That in itself was a long, hard and emotional process.

On March 6th our yacht, an Beneteau 411 from 2001, was put on the hard for a massive refit, including, but not limited to full rig check, all new through hulls, cutlass bearing, propeller shaft, rudder bearing, running rigging, sails, exhaust manifold & heat exchanger, new sprayhood & cockpit tent – you name it. We even had our good sailing buddy Bjarne the Yacht Mechanic up from Denmark to help us with the job.

This refit project was to be finished on April 1st, with the yacht ready to set sail at any time after that. But then everything went to shit on March 12th.

It became instantly very clear to us that this virus would not be going away any time soon, and that our trip to the Caribbean was not gonna happen; while I was stunned for days immediately after , Lea got her own emotional roundhouse kick in the days we were supposed to be off.

All deliveries to the refit project were put on hold. Eventually deliveries started coming in again, but sails stuck in Asia due to Corona shutdowns of the factory etc made things go excruciatingly slow.

Fast forward 4 months to July 22: our yacht is still far from ready, and we still have deliveries waiting, but we cannot wait any longer – we NEED to get out and sail.

And if we can’t sail out into the big world, then let’s sail along the magnificent Norwegian coast instead! Past the Arctic Circle! Maybe even see The North Cape from the ocean side! Instant morale boost! Let’s spit in the face of Covid, and let’s FUCKIN’ DO IT!

Wanting to go north, we aimed for Os. Our first leg, a short day trip, took us from Stavanger to Haugesund. Haugesund is a lovely little coastal town with Viking heritage, and well worth a visit. The city has several great chandlers and facilities for boat repairs, but of course, no LPG installer.

When I made the call to Os Marineservice about the LPG, it turns out their LPG guy just went on vacation. Fucking wonderful for him.

I made a few more calls, and it turns out Viknes Båt og Service on Askøy just outside Bergen is certified. Yes, they can help, but their LPG guy is off for vacation in a few days. So off we go again. Full speed ahead towards Bergen.

Now, before I continue, I need to mention that, despite Bergen being the city where Lea and I met, it is also – by far – the rainiest city in Norway. In 2006, the year before we met and moved in together, we experienced 85 consecutive days of rain. Fuck. That. Shit.

Long story short – Viknes Båt og Service did not help us. We don’t think they had any other plans than just fucking off on vacation that day.

Florø, way further north, was the next place with certified LPG people. Solheim Diesel was the company. Their guy was, surprisingly, also on vacation, but he would be back in 3 weeks time, and they would love to help us if we hadn’t solved the issue already by then.

But then they also tipped us about companies specializing in land based LPG installation could also help us. FANTASTIC! Few more phone calls, and we get a visit from Gass Service in Bergen.

We took the opportunity to moor in the very charming marina of Strusshamn, thinking we could get our laundry done in the facilities, but of course these facilities were all shut down by Bergen city as a Covid measure.

I will not bore you with all the further details, but every time we though it was sorted out, it turned out we still had a leak, and it took three visits from Gass Service to have the issue solved. It was as if Bergen did not at all want to let us go.

Redundancy for crucial systems onboard is a huge deal to us, so we were equipped with a single hob electric induction cook-top, a Trangia (methylated spirit) – and Solar oven. But good luck with cooking on a solar oven in Bergen…you know, the rainiest city in Norway…

But on August 2nd, after trying to get north of Bergen for 2 weeks, we succeeded eventually, and our entire LPG system is now brand new. Pheww!

This was extremely frustrating and slow going, but we can finally cook on gas again, and we can finally fuck off from this foggy, cloudy, rainy shithole called Bergen.

Quite exhausted by the whole LPG ordeal (and the entire year before that), we’ve done a several short legs, sailing from one amazing anchorage to the other, foraging berries, mushrooms and wild herbs. Generally just trying to catch our breath and lower our shoulders a few notches.

We hope to make a more proper Norway coastal cruising guide down the road, but here is a very quick summary:

Børøy Naturhavn was quite alright, with great scenery and hikeable surroundings. Not much mushrooms, but blueberries and lingonberries everywhere.

While anchored on the island of Toska, our anchor was put to the test with 30 knots of wind during the night. I must admit is was not a very pleasant night, and I woke up several times with jolts of instant alertness by the sounds from anchor chain being brutally dragged over rocks, the boat bobbing about, and the wind howling in the rigging.

I was actually much more at ease last year when we got hit by 40 knots of wind during our crossing of the Bay of Biscay last year, cause at least then I didn’t have a land mass less than 20 meters away to crash into…

But of course, our new Rocna 25 kg anchor on a 5:1 scope did not budge. I’ll plug my ears and sleep like a baby next time, thank you very much.

The next day the skies were all clear, and we decided to row out and explore the area. We were denied access to the beach by a big-ass cow, but we made a few really killer pasta dishes with what we foraged.

A brisk sail with 25-30 knot gusts took us to Vikingevågen (The Viking bay). Cool name for an anchorage, but not much else going for itself. It is just “ok”. Hardly any 4G coverage either. We left after just one night.

Kjerringvågen, with its narrow entrance was STUNNING! Not much mushrooms, at least not the kind that goes on our menu, but we found blueberries and wood sorrels and ended up making a fantastic pasta dish with crispy fenalår.

After having sailed north for roughly 200nm, we are now right outside Florø, a lovely little coastal city. Despite its size, it boasts the largest chandler in Norway, has its own world class brewery, and great provisioning too.

As of right now, we have no idea what’s gonna happen for us, but we know one thing for sure – there will be lots of sailing and voyaging ahead. So fuck you Covid; social distancing becomes very easy, and very comfortable on a boat!

If the situation improves in 2021, our Plan A) is Caribbean, Plan B) is the Med, and Plan C) is to continue sailing and exploring the absolutely stunningly beautiful coast of Norway.

Lea just started her vacation today, and we’re just ready to kick back and relax here in Hollendarvågen this weekend.

With Bergen refusing to let us go for weeks, we likely won’t make it past the Arctic Circle this year, but I’ll be damned if I won’t be enjoying every second out here, where ever we end up – we were dealt these cards, and we’ll be playing them!