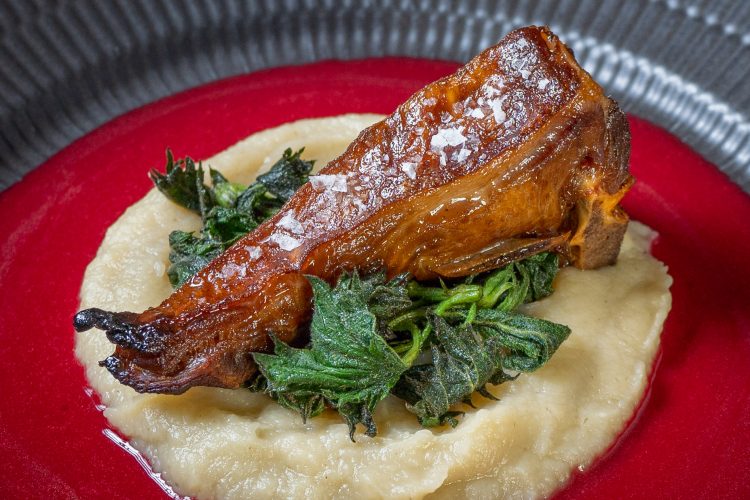 Pinnekjøtt is my favorite thing to eat in the whole world. While the Norwegian west coast is known for its Pinnekjøtt, this modern take on the classic will make the traditionalists scream for blood. Screw them.

I have previously published my recipe on the traditional way of preparing Pinnekjøtt here:

In short, it is (sometimes smoked) dry cured and steamed mutton served with boiled potatoes, rutabaga and sauce.

Pinnekjøtt is both the meat, and the dish, and directly translated to English, it means “stick meat”. The ribs looks like sticks, but they are also steamed on birch sticks.

Honestly, I’m not sure which version, this or the traditional, I love the most, but they are both TO. DIE. FOR.

We used smoked Pinnekjøtt from kid (the goat!), but mutton will be just as good. If you can’t find smoked Pinnekjøtt, try a BBQ smoked beef short ribs instead. I wrote about how to forage nettles in the nettle soup recipe, but if you can’t forage stinging nettles, or it’s out of season, use spinach instead.

Start by preparing the meat. For detailed instructions and vegetable stock recipe, look up my recipe for traditional Pinnekjøtt. The summary is:

Boil the sunchokes tender, tip out the water and let them steam off as much as possible. This will allow you to add loads of butter. When steamed off, run in a (ideally upright) blender with half the butter until completely smooth. Tip back into the pot, season with fine sea salt and keep warm. Stir in more butter if the puree can take it.

Pick through the nettles to remove the stems, then quickly sauté in a bit of butter, add the cayenne, sugar, and fine sea salt to taste. It should be a mild, yet rich and herbaceous flavor.

Let the raspberries come to a simmer under lid, and simmer gently for 30 minutes. Strain the juice, tip the juice back into the pot and reduce by half.

(you can make a decent jam from the remaining “pulp”: 2 parts pulp to 1 part sugar by weight).

When ready, mount the raspberry with cold, cubed butter to make the emulsion. Season with fine sea salt, and a small splash apple cider vinegar. More about making emulsions in Mini Masterclass at the bottom of this post 🙂

Plate with a few spoons puree in the middle of your plate. Top with a small mound of stinging nettles. Brush the lamb meat with hazelnut oil, and place a few pieces on top of the nettles. Next, drizzle the raspberry emulsion around the puree, and sprinkle a few crystals Maldon salt on top of the meat to finish it all off.

We had a Schloss Vollrads 2016 Riesling with this meal. While Rieslings in general works very well with Pinnekjøtt, this one in particular had a fantastic affinity with the stinging nettles.

An emulsion is a mixture of two or more liquids that are normally unmixable, for example mixing a water based liquid with fat, such as oil or butter.

Mayonnaise, and all the classic French Hollandaise-based sauces are great examples of an emulsion; cold emulsions and warm emulsions.

What is crucial with the warm emulsions is to not let them get too hot. If the temperature goes above 70C (158F), the fat will separate and your sauce is ruined. If making a Hollandaise-based sauce with egg yolk, the egg yolk will start to coagulate and basically scramble your sauce at around 65C (149F).

The raspberry emulsion is one of the simplest kinds of emulsion sauces, and is basically a beurre monté (French for Mounted Butter). A beurre monté is simply a tiny dash of warm water where you gradually whisk in cold butter, and make sure it never goes above 60C to be on the safe side.

But you can use almost any kind of liquid instead of water, and get all sorts of amazing sauces; everything from rich stocks to wine, fruit juices, ale or booze, so it’s incredibly versatile!