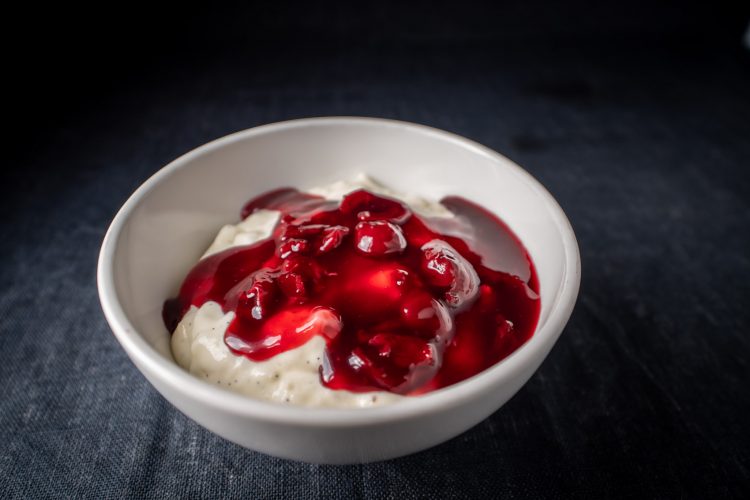 I’ve always liked the Norwegian Riskrem, which basically means creamed rice. But when I met Lea, I was introduced to the – ahem – superior Danish Risalamande. Here’s how you make yours!

Place your raw almonds into boiling water, and boil for exactly one minute. Drain in a colander or strainer.

Wrap them in a kitchen towel and give them a good rub all over, then pick trough the ones that hasn’t already been skinned afterwards. Chop coarsely, and set aside.

Split the vanilla pod, scrape our the seeds, and mix the seeds well with 1 tbsp confectioner’s sugar. Tip into a bowl with the cream, and whip the cream until soft peaks form.

Add the whipped cream to the cold rice porridge, add the remaining confectioner’s sugar, chopped almonds, and mix well. Cover bowl with a lid, and set in the fridge until serving. It is best served within a few hours, but keeps well for a day.

Traditionally served with cherry sauce, but we are huge fans of chili orange sauce too! Recipes for both below 🙂

Tradition is also to have one single whole skinned almond in the Risalamande. Whoever get’s the almond gets a marzipan pig!

Tradition is you make the porridge the day before the dessert, and have the porridge for dinner, with a knob of butter in the middle, and sugar and cinnamon on top. This recipe is dinner for 4 + dessert for 4 the day after.

Bring water, rice and salt to a boil, and simmer under lid until much of the water has boiled into the rice, approx.. 10 minutes. Add the milk and simmer at very low heat while stirring occasionally, until creamy thick.

Add all ingredients to the pot, except the corn starch, bring to a boil, and simmer gently for 10-15 minutes. Mix the starch with a bit of water, and tip into the pot. Simmer for a few more minutes until thickened. Put a lid on, and set aside to cool. Serve at room temperature.

Add all ingredients to the pot, bring to a boil, and simmer gently for 10-15 minutes. Put a lid on, and set aside to cool. Fish out the pod before serving. Serve at room temperature.