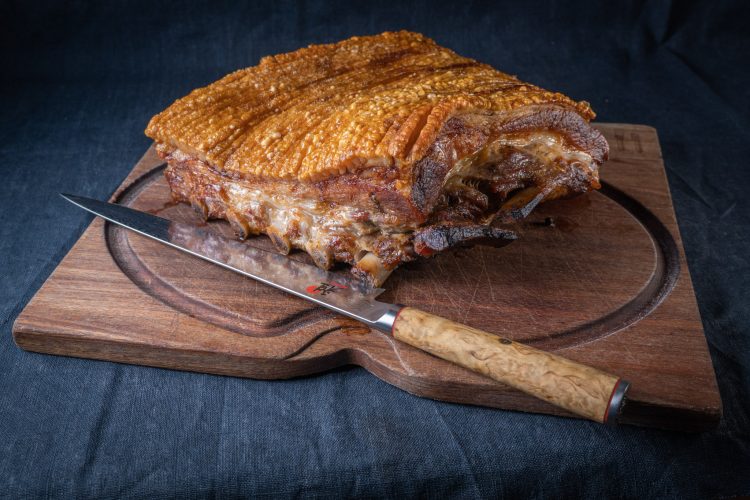 Ribbe, or juleribbe is one of the most iconic dishes in the traditional Norwegian kitchen. Made from pork belly, the goal is the juiciest meat with the crispiest crackling. This method is by far the easiest way of getting the most spectacularly crispy crackling and mouth watering meat.

This recipe is featured in The Big Five traditional Norwegian Christmas dinners & recipes:

We serve this with a strong home brewed, caramelly Vossaøl (recipe), and a shot (or two!) barrel aged Norwegian Aquavit. And perhaps Risalamande for dessert 😀

I shit you not – every single year, without failing, recipe upon recipe is published with the promise of the perfect crispy crackling. Hobby cooks and professional chefs alike fuss over minute details, and arguing which method produces the superior result; you must roast it up side down, then flip it half way through. Whaaat?? You must baste it every so often, and roast it for 1 hour per kilo; no, no, no, you imbecile, you must cover in foil and braise it. Are you mad? The key to the crispiest crackling is hand fed, pampered organic pig, from an obscure, ancient Norse pig breed only found in the north-eastern corner of Hakkadalen…it goes on, and on, and on….and it’s sooo labor intensive!

I’m a lazy SOB, and if I can get superior results with a fraction of the work, then I’ll fuckin do exactly that. I have used this exact method unchanged since 2010, and it has consistently delivered perfect results Every. Single. Time.

This method is really simple, and it is based on rock solid kitchen science. It is, as we say in Norway, “Idiot proof” regardless of how big or small your pork belly is.

Pro tip: The weight of the meat does not matter at all, it’s how thick it is that matters. As thermal physics dictates, a thick piece of pork belly will need longer time to reach the same core temperature as a thinner piece.

I will now tell you why this works, but feel free to scroll down to the actual, and very easy recipe and just cook the damned thing if you prefer 😉

This first clue is that you need to give the pork belly two different heat treatments, with two different goals; first low and slow to make it juicy, then crank up the heat to get the crackling crisp.

But how do you know how long at how low heat, and when to crank it up? Well, that’s damned easy too, because we already know that the number one key to juicy meat is core temperature.

It is a scientific fact that the lower core temperature, the juicier the meat. But we certainly don’t want to eat raw pork; it simply isn’t safe. The lowest recommended core temperature for pork is 62C/145F.

That is what we’re going for. Because when you crank up the heat again, the temperature will continue to rise, and by the time the crackling has crisped up, the core temp will read somewhere around 70C/158F.

But to produce an even juicier result, we use a little bit more kitchen science: a process called osmosis. Feel free read up on it on Serious Eats , but the short version is that salt helps to retain much more juice in the meat.

We also know that key to getting a crisp crackling is a humid heat treatment of the rind; that’s why some prescribe roasting it upside down, or frequent basting throughout the roasting. And finally, we need a killer gravy.

What it all boils down to is this super simple method:

See how easy that was? Ready to cook? Let’s go!

For the pork belly

I remember making this when I lived in Canada, and finding the right cut of meat was hell, so here’s my best explanation:

You are specifically after the lower parts of the rib cage called “tynnribbe” in Norwegian, not the thick, meaty part near the back. I think this cut is superior, simply because you maximize the amount of earth-shattering crispy crackling.

That entire piece is sold as “familieribbe” in Norway. I think it’s a spectacularly bad idea, because there’s such a tremendous difference in thickness it’ll be impossible to get right; either the thick part will be undercooked, or the thin part will be dry as fuck.

So look for a piece with good marbling, relatively even thickness, not too big areas of thick fat layers, and you want approximately 1 cm fat layer right underneath the skin. You definitely also want the section with bones, because you’re also making a stock.

Please also make sure the pig is bred organically, and has access to roam freely. Pig farming, even in Norway, is one of the absolute foulest meat industries that exist, so buying organic at least ensures the pig was well taken care of, before landing on your plate. I think we owe them that much.

Lea and I chomped down 1.2 kg pork belly over two dinners. That was a lot of meat for us. I would say that for normal eaters, I would recommend 250 g per person (remember there is bone in this too), and for big eaters around 300 g. Definitely not more if you also plan to serve a dessert. Like our Risalamande…

With a very sharp knife, score the skin. I like to use my razor sharp chef’s knife, but many swear by a carpet knife where you can easily adjust cutting depth; Make sure to cut all the way through the skin, but not into the meat beneath the layer of fat. You can also ask your butcher to do this.

The scoring is important for two reasons:

Some make a square pattern, some make super thin stripes, and some make a diamond pattern. The diamond pattern is my least favorite, cause it makes it harder to cut the meat when you’re ready to serve; you’ll be cutting in between the scoring. And whereas the strips and squares run along with the bones, the diamonds run across them…

Next, season liberally with fine sea salt; remember this is a big piece of meat! Rub it well into the crevices of the scoring, and on all sides of the meat. Put on a roasting tray, and set uncovered in the fridge overnight.

The next day, coarsely chop the onion, bash the garlic, and cut the rest of the veg into large-ish chunks. Put everything in the roasting tray, pour over the beer, and with the pork belly on top.

Make sure that the pork belly does not sag down in the middle, or else fat and meat juices will pool here and make it impossible to get crisp crackling. Rearrange the pork belly, supporting it underneath with the veg pieces so that it’s relatively flat, or gently slopes down in the sides so that fat and juices can be drained. Just remember an even height is crucial for evenly crisp crackling.

Insert a thermometer probe into the thickest part of the meat, making sure you do not hit bones. Cover everything with aluminium foil.

Remove the pork belly from the oven, crank up the heat to 230-240C (Google it to convert to Farenheit). When the oven has come to the new temperature, remove the foil and put the pork belly back in. If you have a convection oven, use convection.

Note that if your oven has uneven heat, it may be a good idea to rotate the tray after 15 every minutes to avoid burning and/or chewy rind. This is also a good point to make sure you still have sufficient liquid left in your roasting tray. Remember this is for your gravy, so refill a bit with warm water if running low. Don’t add too much water though, or you’ll get a watered out gravy.

The whole crisping process should take 30-40 minutes – this really depends on your oven, so pay close attention the first time you make it. You may also want to turn the tray 180 degrees in the oven for an even crisping-up.

When you are happy with the way it looks, remove from the oven, transfer to a cutting board, and let sit at room temperature, uncovered, for at least 30 minutes.

I know this long rest will raise an eyebrow or two, but consider this: the meat will have a temperature of around 70C when it comes out of the oven. Fat has a very high heat capacity, so if you eat it too soon, you’ll have to blow on it to avoid blisters.

As the meat sits, the temp will come down to 55-60C, which is an actual enjoyable temperature for meat. The meat juices will also get time to redistribute evenly throughout the meat, so that when you cut into it, you will hardly loose a drop of juice:

Transfer the braising liquid to a taller, narrow heat proof container. Skim off the rendered fat. Reserve for other cooking, to put in the red cabbage, or in the leftover Ribbe steamed buns.

The last few drops of fat can be tricky to skim, so plop a handful ice cubes into the container. This will cause the fat to solidify instantly, and will be super easy to lift out. Failing to remove the fat will cause the gravy to split.

Your container with braising liquid should measure 0.4 liters. If too little, add more water.

In a small sauce pan, melt the butter, then stir in the flour. Toast at medium heat to a nice nutty brown. Take care not to burn things. Gradually whisk in the braising liquid, making sure lumps does not form. You should end up with a nice, not too thick gravy. Adjust with water to personal preference.