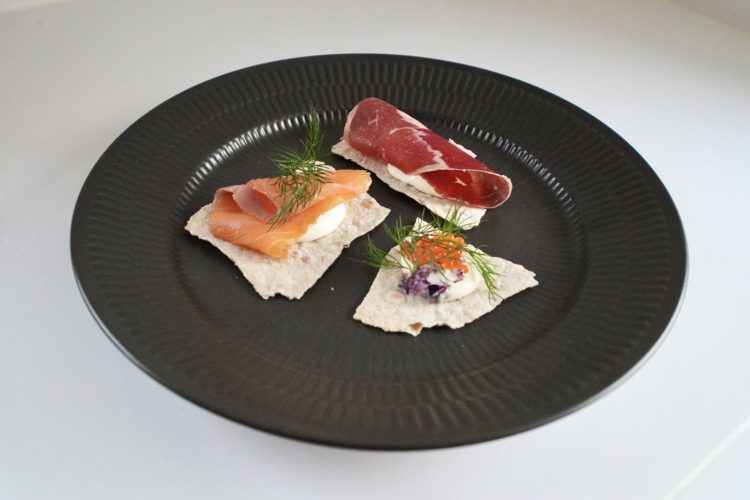 Another staple in the traditional Norwegian kitchen, the Flatbrød, an unleavened, wafer thin and crispy bread that was the sustenance for centuries. We still love it to this day!

The basic ingredients are barley flour, salt, and water, though many varieties exist which incorporate other staples, such as rye, wheat etc.

It was once generally eaten in all meals, on the side with stews and porridges, with cured herring and cold boiled potato, often along with sour cream and/or butter.

The thinner the bread is, the better it is, up until a point. Past that point it is so brittle it’s impossible to spread anything on it. It is rolled and then cooked on a large griddle called Takke, just like with Lefse.

The recipe below is adjusted to fit a regular 28-30 cm skillet so you can make it on your own kitchen with no special equipment. It makes 6 breads.

There would usually be a variety of flours in the Flatbrød, all depending on what you had at hand at any given time. Got some barley? Great! Toss it in. Got some coarse rye flour? Awesome! Some left over boiled potatoes? Chuck ’em in! That’s how it went.

You’re after a consistency much like fresh pasta or wheat tortilla dough – it is very similar. It should be relatively firm, but not dry. Cover with a bowl and set aside to rest for 30 minutes. This rest will help the gluten relax, and make the rest of job much easier.

Roll the dough ball into a log and divide into 6 discs. Shape these discs into round balls. This will help getting a perfect circle and smooth edges.

Cover with a well wrung up kitchen towel and let sit for 30 minutes to let the gluten relax. Dust with barley flour throughout the entire process as necessary.

A good work flow is as follows:

When you think you can’t get it much thinner, go on for a little bit longer on the first one. If you wanna do it the easy way, use a pasta machine instead and make square Flatbrød 😉

Bake in the skillet on high heat until brown spots forms, turn it over and bake the other side too. Transfer to a wire rack to cool. It’ll dry and crisp up completely in a matter of minutes, and can be stored for decades if kept nice and dry.

Serve on the side with Smørgrøt (butter porridge recipe), Fenalår recipe, or with a traditional stew, with cheese, or whatever else you can think of 🙂