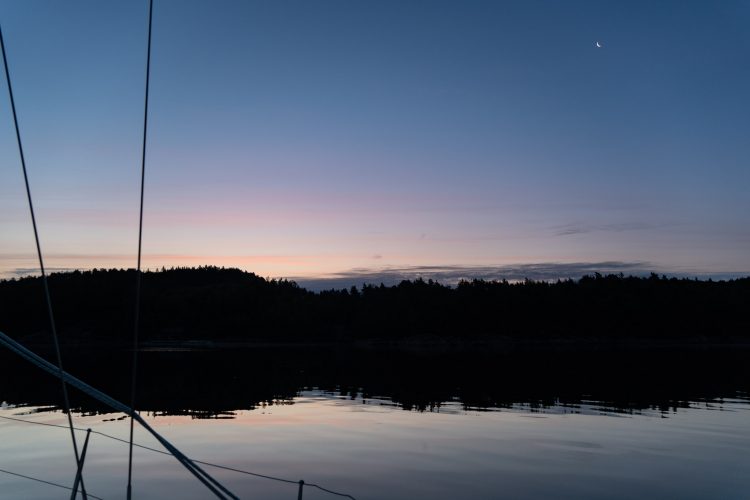 With yet another incoming weather system, and with a very narrow weather window, it was time for us to head south again. Join us as we run before the storm to Hardanger in Part 3 of our 2021 journey.

We started this year’s voyage with the general plan of going as far north as we could for 10 days, and then slowly sail our way south again towards Stavanger again. Four days in, and we were hit by quite the weather system.

It was a fairly calm morning that met us the day after a very lively night moored in the south cove in Langøy, as we told about in Part 2 of this voyage. The forecast told us there was another, even heavier weather system coming in later that day.

We were first and foremost in desperate need of a vacation, not to practice our storm sailing tactics, so we decided to do the sensible thing; With only a 2 hour weather window in the morning, we got up early, and were underway around 9. Running before the storm we were heading south to lovely Hardanger, a 4 hour sail from Langøy:

The gentle breeze this morning allowed us to hoist our brand new Code 0 light wind sail for the first time – it was absolutely magnificent!

Running downwind through Stokksund between Bømlo and Stord, we got to play with it for a few hours. Even without a pole it was incredibly stable, and we could go well past 180 degrees before it started catching wind on its lee side. So it was very forgiving and allowed us to do the entire stretch on a starboard tack.

Just past Spyssøya and Bømlabrua, we started heading eastward on a port side beam reach – it felt quite absurd doing 5 knots in these light winds from the north-west. But then, in the shade of the land masses of Stord, the wind completely died, and we had to fire up the stinking noise maker.

Heading east, and into the Hardangerfjord, we could immediately feel the effect; instead of the cool wind chill of Langøy, it was getting decidedly warm. Clothes were coming off, the iced tea into the glasses, and life was pretty damned good despite the fact that we had to motor.

After a while we were passing Ystøy right outside Lervik, and we could feel the wind picking up a bit. After a few more minutes, it was just about enough to hoist the Code 0 again.

But then, thank the Gods and everything under the sun, I gazed into the strait called Langenuen that runs between the islands of Stord on the west, and Tysnesøy on the east. I saw white caps, and we decided to hoist the genoa instead.

10 minutes later we were flying away at a broad reach at 7-8 knots on a heavily reefed genoa. That’s sailing in the Norwegian fjords for ya. Conditions like these are the norm, but was likely amplified by the incoming weather system.

Sailing in the Norwegian fjords

The winds in the fjords, broadly speaking, goes in one direction, and that is in the direction of the fjord. If the fjord goes from the west coast and east into the land, then you will have wind from the west almost exclusively.

If the fjord goes in the general direction of north to south (like Stokksund), then the wind can blow either of those general directions, depending on the wind direction that day. Then there is the land mass shade to keep in mind, as well as the turbulence you get when two fjords are meeting, some times from different directions, and some times with different tidal water speeds – all of which can make sailing here a lot of…fun…

There is a special case to be aware of too. The dangerous cousin of land breeze are the katabatic winds, downslope wind, or gravity wind; wind that blows down a slope because of gravity. It occurs at night, when the mountains radiate heat and are cooled.

The air in contact with the mountains is thus also cooled, and it becomes denser than the air at the same elevation but away from the slope; it therefore begins to flow downhill, and if forceful enough, it becomes a fall wind.

So as you can see, sailing the fjords in Norway has its challenges. YouTube vloggers Sailing Uma certainly got their feet wet in their Episode 244, as they sailed west, and out of the Sognefjord, the world’s second longest fjord. Their video is well worth a watch if you’d like to know more 🙂

Well anchored in Lykelsøy, I sat leaned back and just let my shoulders down. We were well provisioned, and had agreed to stay here for a few days cause we really needed some rest.

It also gave me some time to reflect on one of the most Norwegian concepts I can think of, and that is Allemannsretten, or “Every man’s right”.

It is one of the most beautiful things here in Norway, and it means that every person has the right to roam, by foot, or by boat, practically where ever you want, as long as it is not clearly private property.

You may for instance put up a tent and camp in the mountains, for free, even though that piece of land belongs to a farmer. But you may not put up your tent on their lawn. You may also anchor practically where ever you want, for free, but common sense dictates you do not anchor right in front of another person’s cabin – especially if they’re in for the weekend or vacation.

At the heart of the Every man’s right is also the right to use your common sense, and to share and make room for others.

Days ago, as we approached Haugesund, we were passed by a boat that I recognized from afar. I spotted them with my binoculars and recognized their silhouette kilometers away; it was Cochise, a 78′ motor yacht designed, built, and owned by Steve and Linda Dashew, who also had the Beowulf built. Cochise had recently been sold, and their new owners were cruising here in Norway:

While such a boat is not a super yacht by any means, the mindset and the sense of entitlement was clearly on display in many ways that we observed. Here’s one of them.

Lea and I had agreed to anchor in the smaller north cove on Lykelsøy, to get some peace and quiet – the larger south cove was filled with a number of boats already, and started to get crowded. But as we entered the smaller cove, we discovered Cochise again. And she was anchored in such a way that she was blocking any other attempts at anchoring, effectively hoarding the entire cove.

The following days were spent in the cockpit, basking in the sunshine and calm weather. Reading books, making some food, drinking some beer, or just dozing off. We couldn’t even be assed to go ashore to stretch our legs – just the kind of break the Doc ordered!

A family of swans swam by several days, but the highlight must’ve been when we were surrounded by a pod of porpoises, a curious mammal that looks like a dolphin, but is more closely related to narwhals and belugas than to the true dolphins. I was so immersed in the experience of their visit that I completely forgot to take a picture until they were on their way again!

After days of charging our own batteries at Lykelsøy, we slowly made our way to another sheltered anchorage, just a few hours further south, called Bjøllebøvågen:

During the days we spent here, early in the day before it got too warm, we ventured ashore, to explore our spectacular surroundings, to look for berries, to look for mushrooms, and to look for wild herbs and other things to forage.

This stay gave us the chance to test our new Ooni Karu pizza oven for the first time, so one evening we were chomping down freshly baked Neapolitan pizza with fresh mozzarella, bacon and foraged blueberries.

And waking up at 5 in the morning to piss out the beer from the previous evening is not such a bad thing when the view is this amazing!

Unfortunately the entire spring and summer had been unreasonably warm and dry here in Norway; 1.1 °C above the average ( 1.98 °F), and the lowest precipitation in 19 years here on the west coast. So we found absolutely zero mushrooms, which is practically unheard of. I’ve foraged mushrooms for at least 30 years, and I cannot even remember this meagre a mushroom year.

So while us Norwegians may get more sunshine and vitamin C, climate change has a decidedly observable negative effect here too – increasing draughts in the summer, and increasing deathly mudslides in the fall being but two of them.

As much as we loved to stay here in Bjøllebøvågen, we felt it was time to move on – we had plenty to explore before heading back home to Stavanger.

In the next installment of this blog series, we will tell you about our visit to Sunde, our talk with head brewer at Vaage Bryggeri, and how we discovered the most delectable traditional culinary gem deceptively disguised in a beige plastic tube…