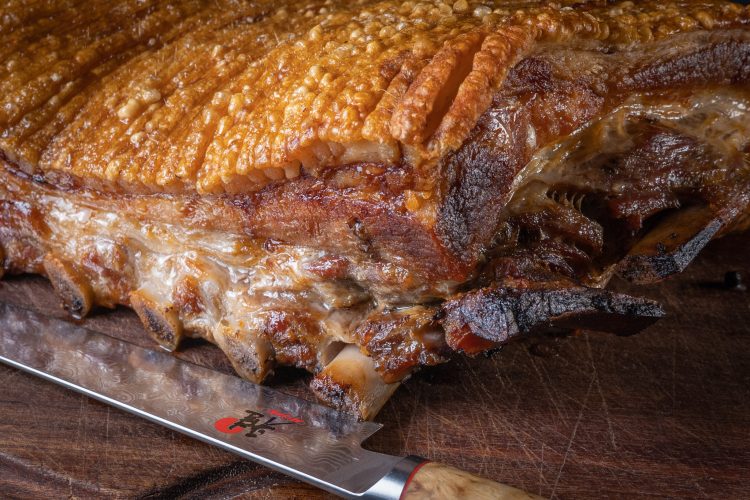 We have five traditional Christmas dinners in Norway, and which one you eat depends mostly on where you come from. This article will take you through all five; where they’re from, how it’s eaten, and a absolute killer, 100 % authentic recipe for each of them!

Spoiler alert: a Norwegian will react with absolute shock, horror and utter disbelief seeing meatballs and lutefisk on the same plate…

At the same time, perhaps you will react with absolute shock, horror and utter disbelief seeing one of the other dishes on your plate? Well, read on to find out!

I come from Stavanger, on the south-west coast of Norway, and since what you eat for Christmas depends so much on where you come from, my “traditional preference” is smoked Pinnekjøtt.

As such, I am very sensitive towards traditions that are not my own, and you will with certainty see variations from family to family how they eat the different dishes; hell, even my dad and I argue over the best way to make Pinnekjøtt. My method is clearly superior….like jeez old man!

I mean of course in no way to invalidate other peoples traditions. But at the same time, this post will make it clear that Norwegian traditions have evolved very differently outside of Norway, if you are a Norwegian American or Norwegian Canadian, for example.

This divergent evolution of tradition is also exemplified in how Rømmegrøt is made in USA. You should check out “Traditional Norwegian Rømmegrøt recipe. The REAL one.” if you’re into that stuff.

You will with certainty find Norwegians exclaiming passionately “dat’s not how it’s made!” after seeing these recipes. But what they really mean is “that’s not EXACTLY how MY family makes it!”

But what I can say with confidence is that the recipes here will be among the best authentic Norwegian recipes you will find, and they will yield results that are truly restaurant worthy, if not better. And it can all achieved with totally normal galley equipment.

Regionally based Christmas traditions had stronger boundaries only 50–60 years ago. The differences are more blurred today, stemming from both cultural exchange, and easier access to various Christmas dishes across the country.

Figures for Northern Norway show that only 25% have Pinnekjøtt on Christmas Eve, but a full 65% have the dish some time during Christmas.

Welcome to the spectacular, weird, and wonderful world of Norwegian Christmas food!

Ribbe, or juleribbe is one of the most iconic dishes in the traditional Norwegian kitchen, and is the most popular Christmas dinner in Norway.

Though its origin is from the eastern parts of Norway, it is enjoyed all over Norway these days, and around 50 % of all Norwegians have it for Christmas. This is a fairly modern dish, since the cast iron oven didn’t become the norm until after 1900.

Made from pork belly, the goal is the juiciest meat with the crispiest crackling. It is always served with potatoes and gravy, usually some kind of pickled cabbage, and often medister sausages or meat balls, apples and prunes.

The method in the recipe below is by far the easiest way of getting the most spectacularly crispy crackling and mouth watering meat, so check out this killer Norwegian ribbe recipe 🙂

Lutefisk is a very old dish, and apart from Smalahove, this is the most notorious Norwegian dish there is. Period. It makes people gag, or screw their faces in pure disgust. I used to hate it, but I found the key to make it actually taste good!

In Norway, you will never see gravy or meatballs on the same plate as lutefisk. Here in Norway, it is served with potatoes, or lefse, and whatever else you have depends on where you come from.

Mashed green peas is very popular, as is crisp bacon. Many have the brown goat’s cheese or dark syrup, and I serve it with a mustard and honey sauce that pairs incredibly well with the bacon and fish, so head on over to see what a 100 % authentic Norwegian Lutefisk dinner looks like!

Out of all the wonderful traditional Norwegian dishes, Pinnekjøtt is my absolute favorite. Nothing comes even close. Pinnekjøtt is rib of mutton that’s been dry cured, and some times cold smoked. It is then steamed or cooked fall off the bone tender, and served with potatoes and mashed rutabaga.

Pinnekjøtt is a very old dish, and before the potato became popular in Norway, after 1815, it was eaten with lefse instead, kinda like a taco.

Pinnekjøtt is the second most popular Christmas dinner in Norway. Here’s how you make pinnekjøtt the 100 % traditional way – plus my own little twist on this Norwegian west coast classic!

Among the Big Five Christmas dinners here in Norway, this is by far the easiest to get right if you know how to do it.

This dish hails from the southern and south-western parts of Norway. It has a relatively modern feel to it with the butter sauce called Sandefjordsmør, but fish for Christmas Eve dates all the way back to before 1536, when Norway was Catholic, since you were not allowed to eat meat during the fast from Dec 1st until Dec. 25th.

Here is the full recipe for Norwegian Juletorsk the authentic way 🙂

Heads up everybody, cause here’s the recipe you’ve all been waiting for! As you eyeball your plate, at the face of it, it’s some gruesome culinary prank. But appearance is only skin deep, and below is the softest, most succulent meat you can imagine; say hi to Norwegian Smalahove!

The name of this west coast specialty means “sheep’s head”, and is what many Norwegians enjoy for Christmas dinner.

The sheep’s head is dry cured and some times smoked, and is otherwise served in the same manner as Pinnekjøtt, and is also a incredibly old dish. Here’s the full, authentic recipe for Smalahove, and much more!

Hear me out, guys: The best dessert for Christmas is not Norwegian at all.

I’ve always liked the Norwegian Riskrem, which basically means creamed rice (what English speakers would call a rice pudding). But when I met Lea, I was introduced to the absolutely superior Danish Risalamande.

It is the same dessert, but those clever Danes have a few tricks up their sleeve that you absolutely need to try! Check out this magnificent rice pudding called Risalamande!

And that sums it up! Have you tried any of these? Or will you try? What will you be eating for Christmas?

God jul everybody, and don’t forget to check out all our other Christmas recipes too!